Here in Mexico City, we often get around on “peseros”, which are usually little green and white buses that carry 20 people or so (for not so popular routes, they sometimes use VW vans). They are called peseros because, once upon a time, the fare was just 1 peso.  Those days are long gone, but even now they still only cost 3 or 4 pesos (about 30 cents).  Peseros are not the least bit luxurious, but they’re obviously cheap and they go everywhere. Best of all, they offer a glimpse of working class life in Mexico City.

Like today . . . we were riding the Ruta #1 pesero along Miguel Angel de Quevedo. It was packed – all the seats were taken and the aisles were full. A woman got on through the back door. We were standing room only, and there was no 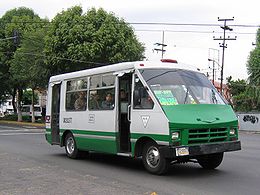 way she could get through the crowd to the driver in the front to pay her fare. But she couldn’t not pay.  So, she took out her 5 pesos and gave it to the person in front of her, who then passed it forward, and on and on, all the way up to the driver. Then the process was reversed, and her change of 1 peso, 50 centavos (about 12 cents) came back the same way. Remember, these are poor working class people, and 5 pesos makes a difference. But it never crossed the passenger’s mind to grab a free ride and it certainly never occurred to the other passengers to hold onto the few coins being passed around. Not a word needed to be said – everyone knew how the system works and everyone knew their role in this little drama.